An interest Rate Swap is a contract whereby each counterparty gets to transform the type of risk management they run. Specifically, it’s a contract where the counterparties exchange a fixed cash flow, which will remain unchanged for the duration of the swap for a floating rate cash flow which will change at pre-defined times and using a pre-defined rate at periodic dates over the duration of the swap.

There are three ways to illustrate an interest rate swap. The first is called a box & arrow diagram.

The timeline Diagram. The timeline diagram show the payment of cash flows over the passage of time:

The third way is called the cash flow diagram. We will discuss this diagram in greater detail in the SWAPS PRICING section.

To An interest rate swap is a contract where one type of interest rate is applied to one leg of the swap while the other leg’s cash flow is calculated using a different type of interest rate. For example: Fixed Pay for 5 yrs & Received 3 Month LIBOR The fixed leg will be paid for 5 years at the same rate The floating leg (LIBOR) will change every 3 months, for 5 years. If interest rates go down, this swap will lose money as the floating rate heir receiving is going down. When we speak about swaps, we speak in terms of the fixed leg. “I’ll pay fixed on $100 million for 5 years” It’s already implied I’m receiving the floating leg. PAY FIXED = make money if rates go higher RECEIVE FIXED = makes money if rates go lower.

To convert the language from futures to Rates, recall with crude oil futures we spoke of End Users & End Producers as participants who would use Crude Oil Futures as Hedges against price risk. 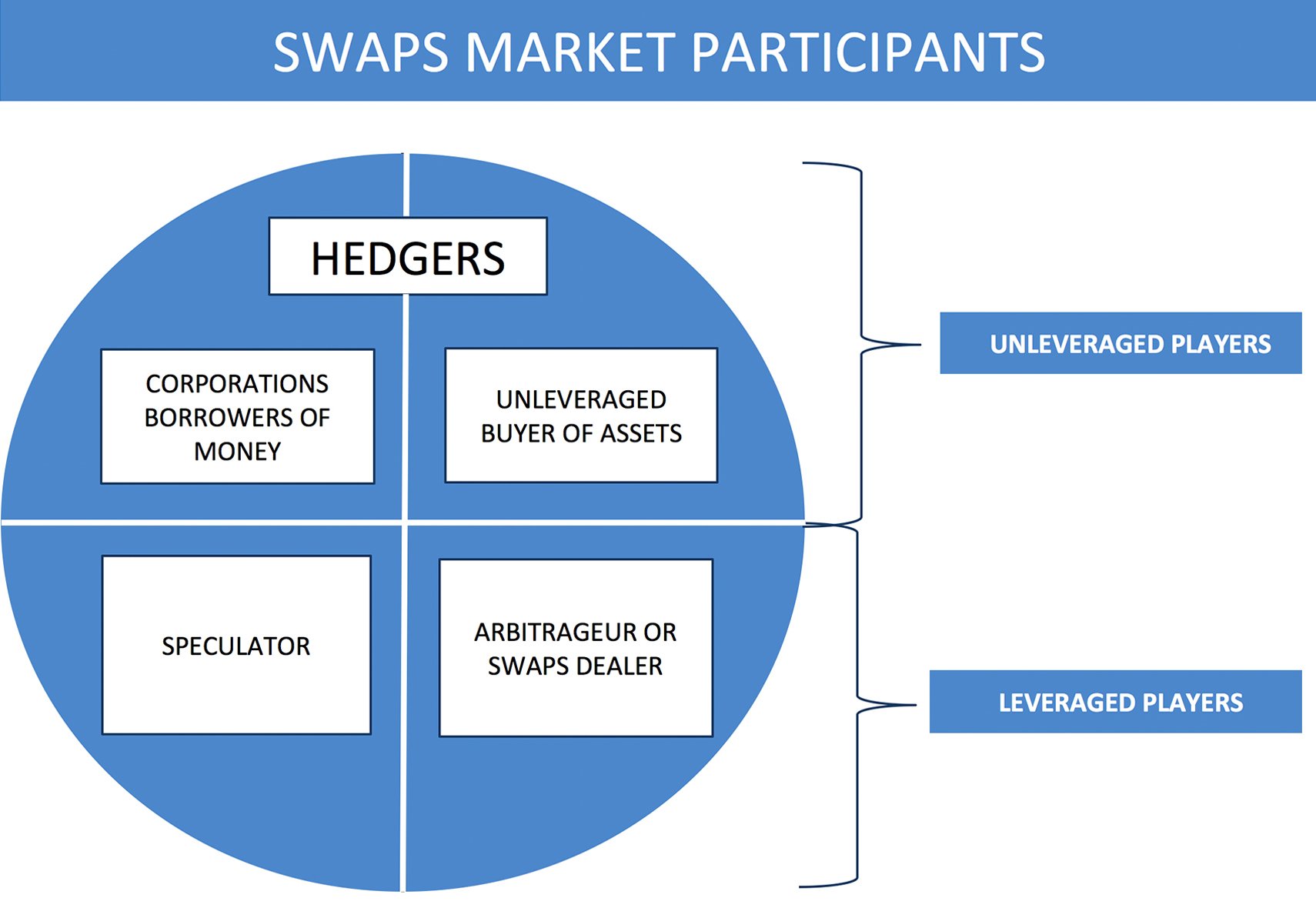 When speaking about other debt instrument relative to interest rate swaps, we speak in terms of the spread between the two products. Below is a corporation bond trading at 4.50%. Today, since interest rate swaps are so liquid, we would say the bond is trade +50 bps over swap rates. The 150 bps is partially the credit rating spread. But relative liquidity between the bond and the swap, the relative duration etc would also be taken into account. Another spread tracked closely is the swap spread. In the illustration below, the swap spread is 100 bps, the swap rate is 4.00% (US Treasuries + Swap Rate). 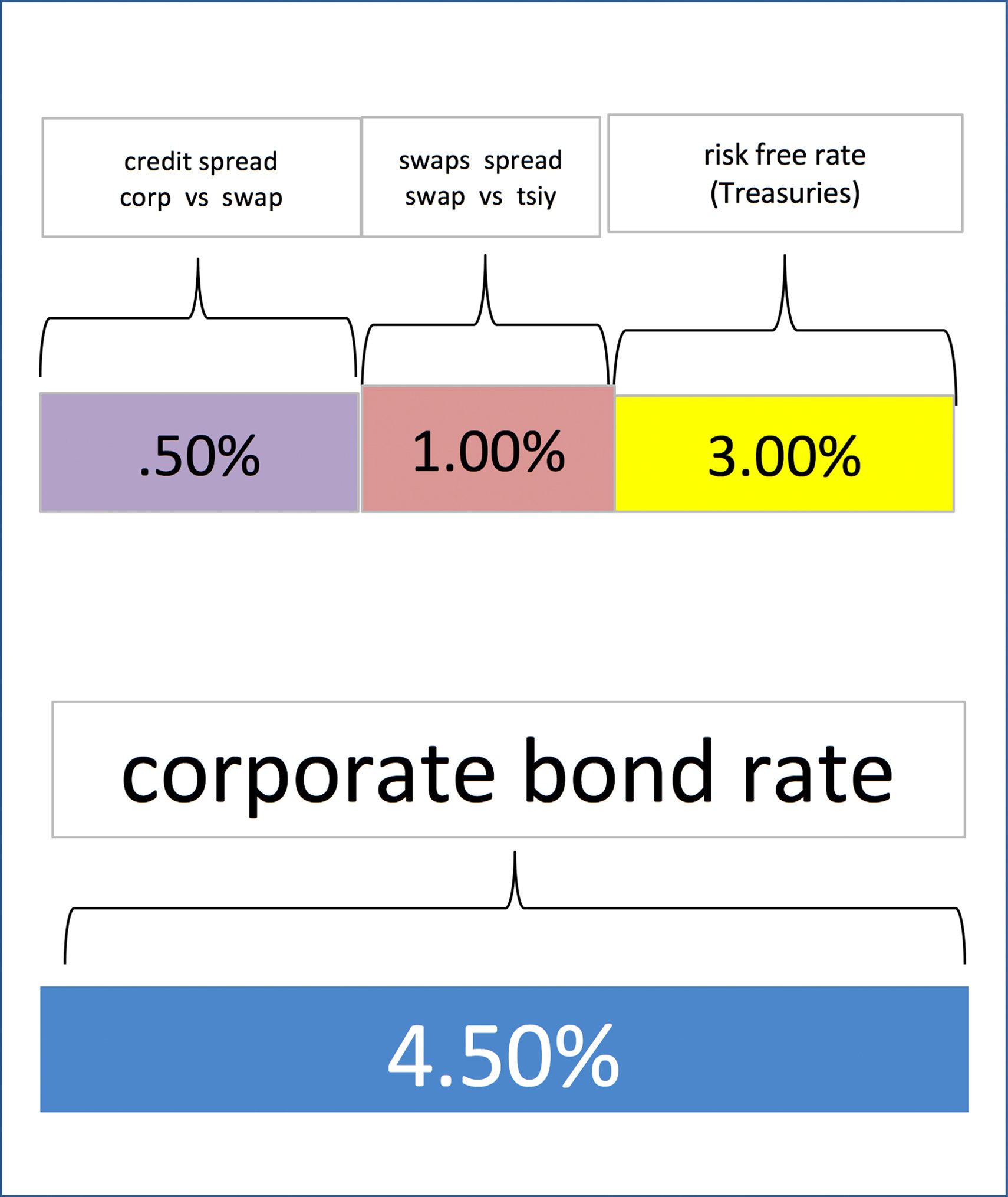 With respect to interest rate hedgers, it may be worthwhile to discuss how corporations raise capital. Corporations can either borrow money from a bank, or if their credit rating is high enough and they are well known in the market can issue bonds in the public bond market. The determination will be which market they receive a lower rate.

In the Interest Rate Swap Market the concept of Comparative Market Advantage is useful to understanding why each market participant uses swaps. As we go through the hedger examples, we’ll speak to this comparative advantage with respect to each player.

A AA-rated Corporation typically can borrow in the public bond market (fixed rate) at a lower rate than they would pay to a bank on a bank loan. They will issue a bond and pay a fixed coupon to bondholders. If the Higher Rated Corporation wants to pay fixed and it fits their asset-liability management, their fixed-floating mix and cash flow then they will remain in a fixed rate liability. If not, they will enter into a swap, swapping from a fixed rate liability to a floating rate liability. Let’s take a look. 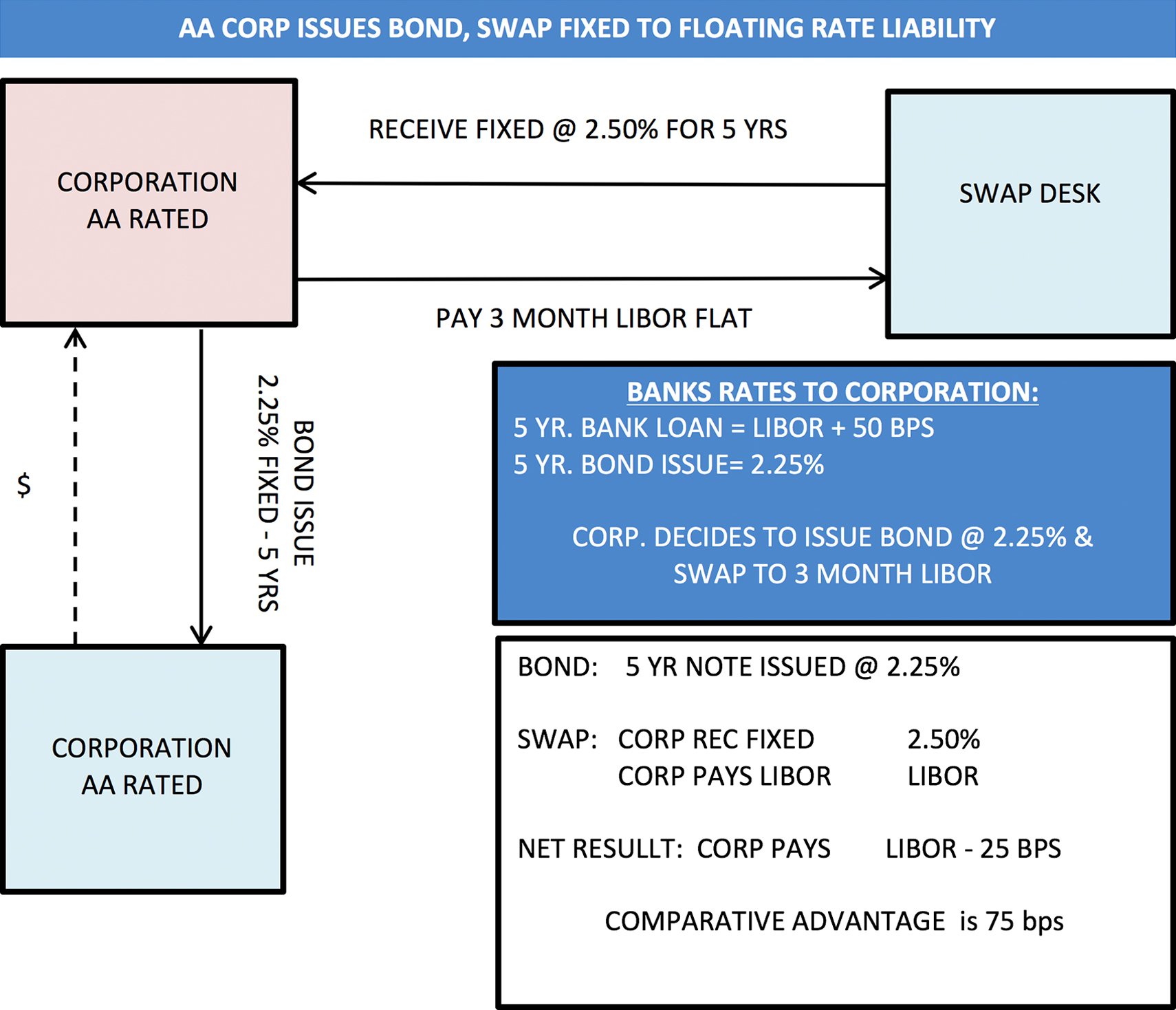 This AA corporate could have remained a fixed rate borrower for 5 yrs. There are several reasons why corporations choose to swap. 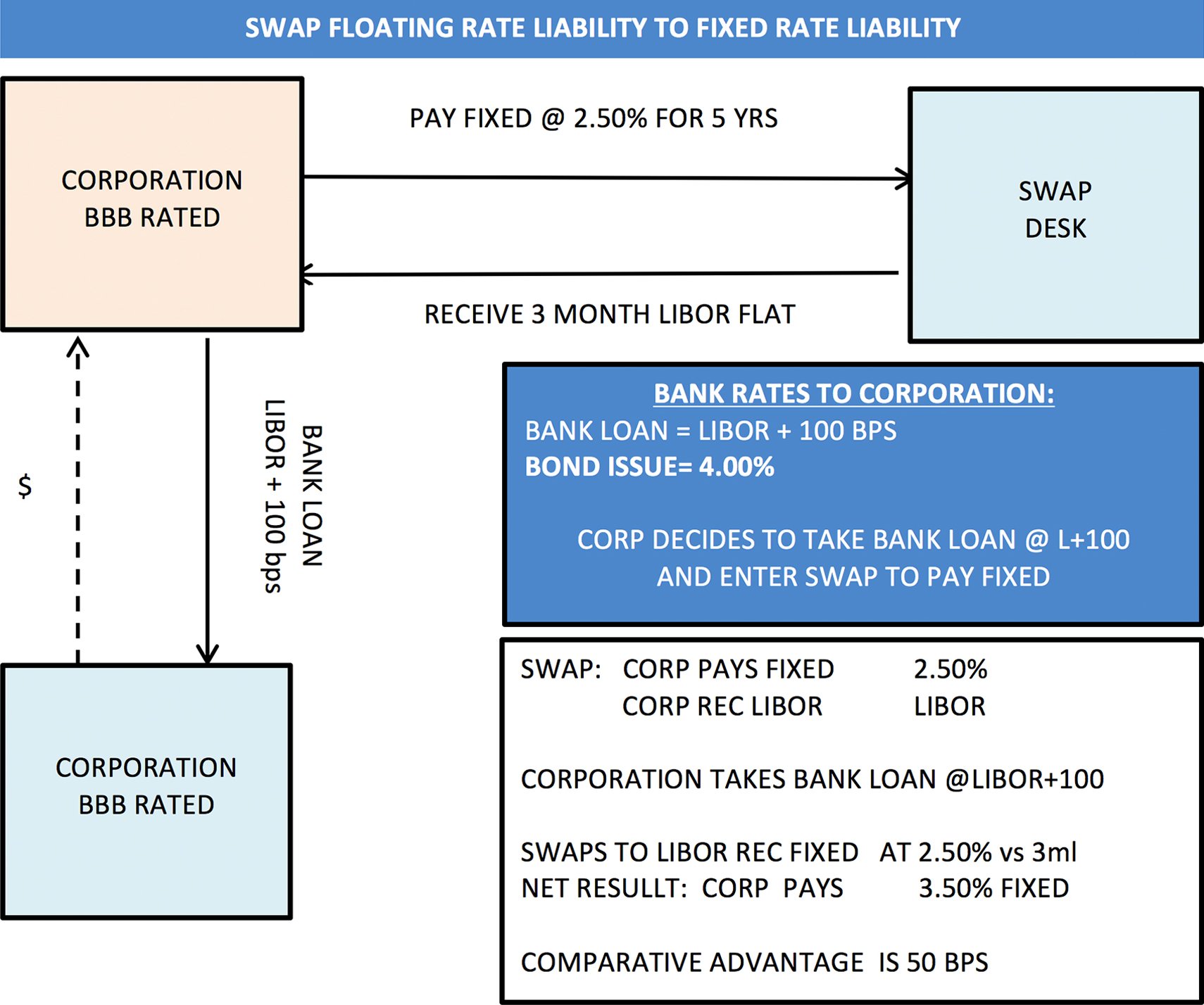 Asset managers can also be seen as Lenders of money by buying bonds from corporations. The type of asset buyer we’re speaking about in the upper right hand portion of our participants circle is an unleveraged buyers of assets. Asset managers use Swaps to create an asset swap. In an asset swap, the asset buys a fixed rate note or bond and enters into a swap to PAY FIXED AND RECEIVE LIBOR. The end result is the asset manager receives LIBOR plus a spread. Effectively they own a synthetic floating rate note. The asset manager can purchase the bond and enter into the swap on their own, as in the diagram below. 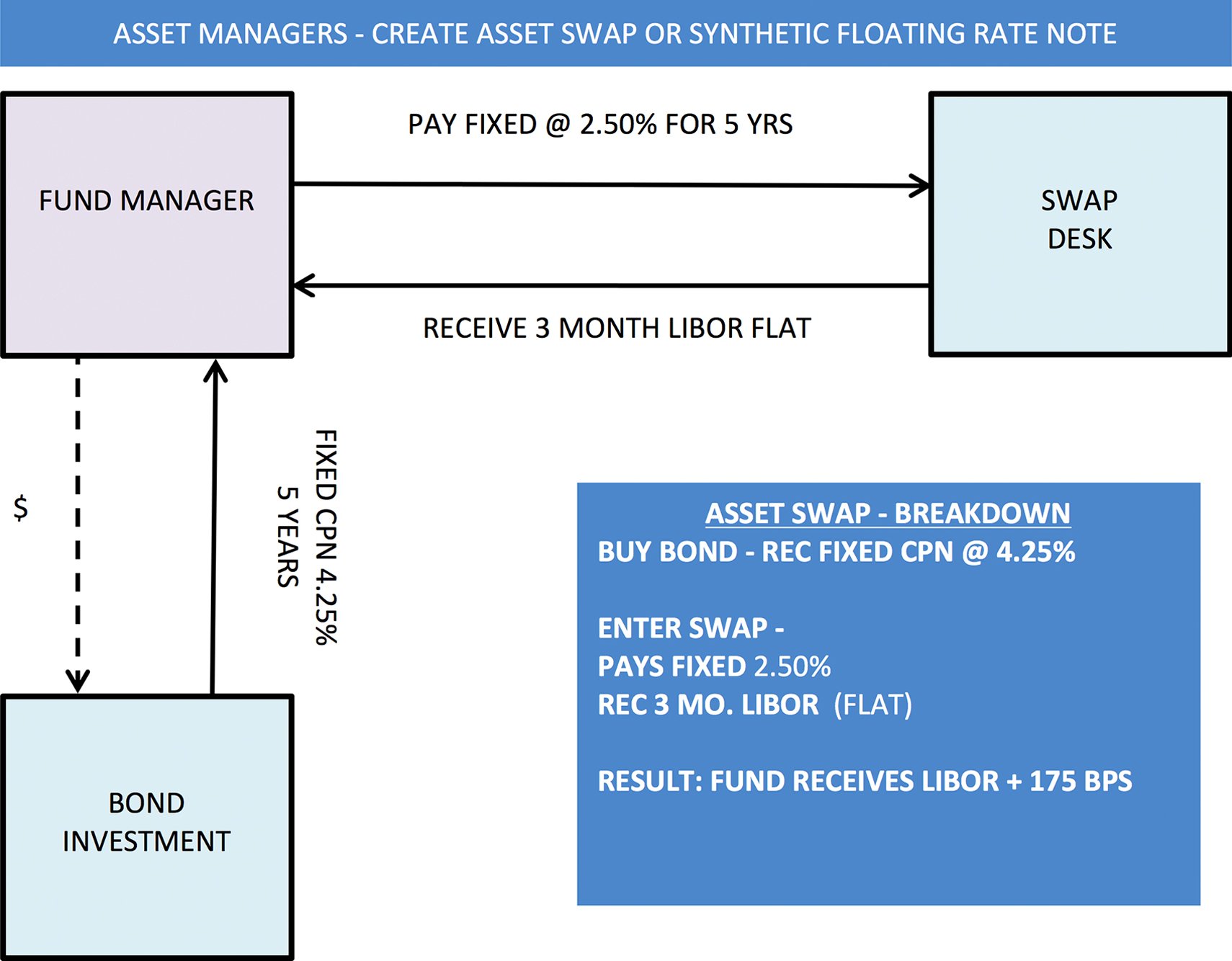 Asset Managers also use interest rate swaps as a hedge. Asset managers are paid by client to outperform some pre-agreed bond index. That index has an average maturity or duration of the bonds included in the index. An asset manager can outperform their index in several ways. They can buy more long dated bonds if they think the market will go up or purchase more bonds of the corporations they like. Conversely, an Asset Manager may choose not to buy some of the bonds in the index because they don’t like the credit risk. However once a portfolio of bonds has been put in place, if the manager thinks the market will trade lower, managers don’t want to pay the slippage (bid-ask spread) of selling the bonds and rebuy them later. So they take an alternate route to hedging their rate risk. Asset managers will overlay an interest rate swap to shorten the duration of their portfolio. For those unfamiliar with DV01, it’s the amount the bond will change for a 1 basis point change in rates.

Down the second column of the matrix, you’ll note an increasing column of numbers. Taking a look at the 5 yr row, the present value for each number of years at the rate in force when the matrix was built shows a 5 yr bond portfolio has a DV01 = $481.96. To illustrate the most extreme hedge, we’ll use the following illustration: 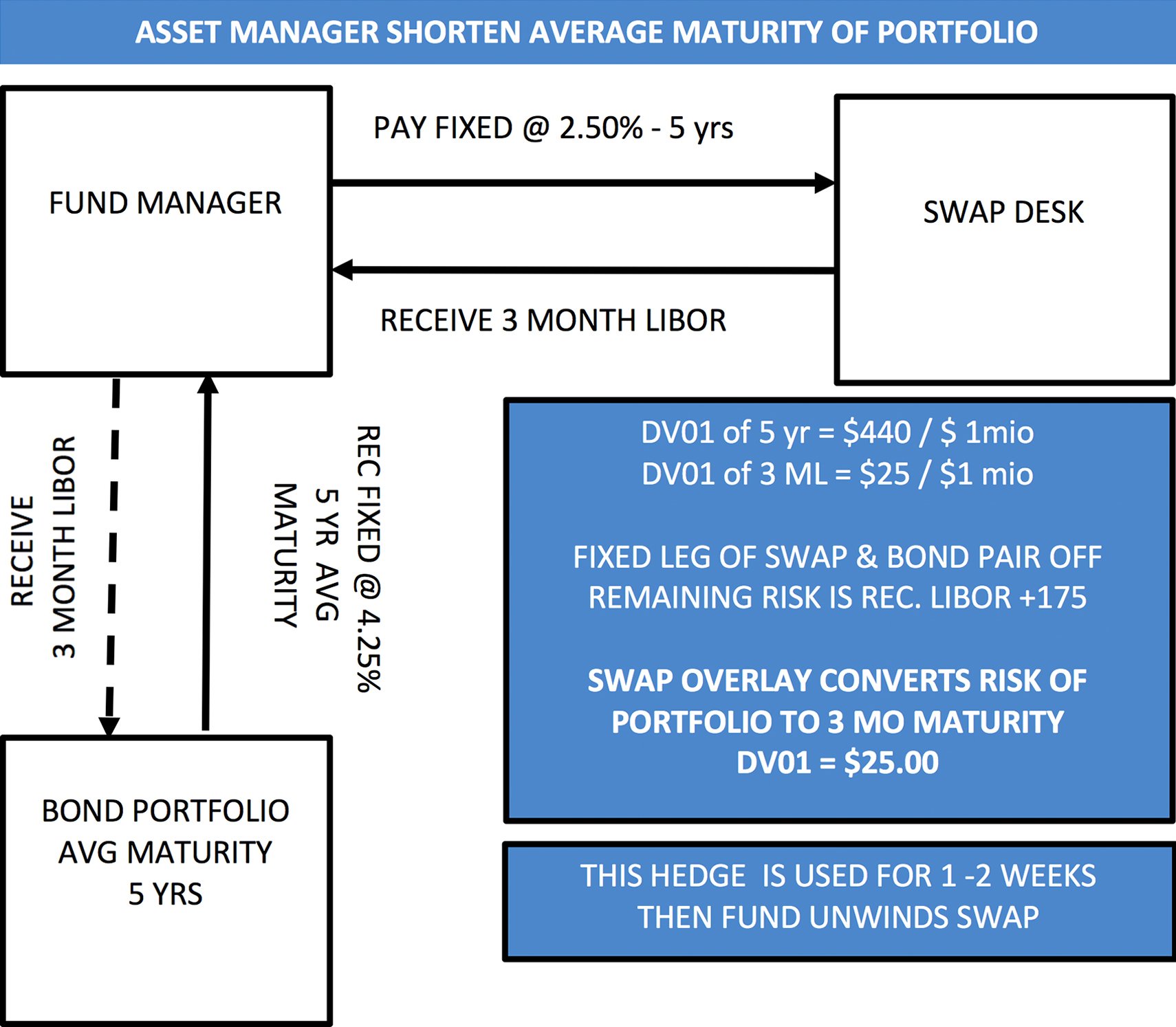 By putting on the hedge 1:1, we’ve turned the portfolio into one similar to our asset swap. But for an asset manager whose index has a 5 yr average maturity, we need to look at the difference in risk to see the hedge. Earlier we saw the average risk was $481.96. With the hedge, the portfolio’s DV01 is now only$25!! if rates go up as expected, this portfolio manager will only lose $25 per basis point (for each $ 1 million invested). The unhedged portfolio manager will lose $481.96 per basis point (for each $1 million invested). This is NOT A LONG TERM HEDGE. This hedge will be in place for two weeks but not much longer. Once the market goes down, the hedge will be taken off. This type of brute force hedging, without refinement for the credit spread risk, etc. is not elegant, but it works. Particularly in fast markets.

Looking just at the coupon flows, the position is receiving the fixed coupon on the bond and paying the repo rate on the financing of the bond position. 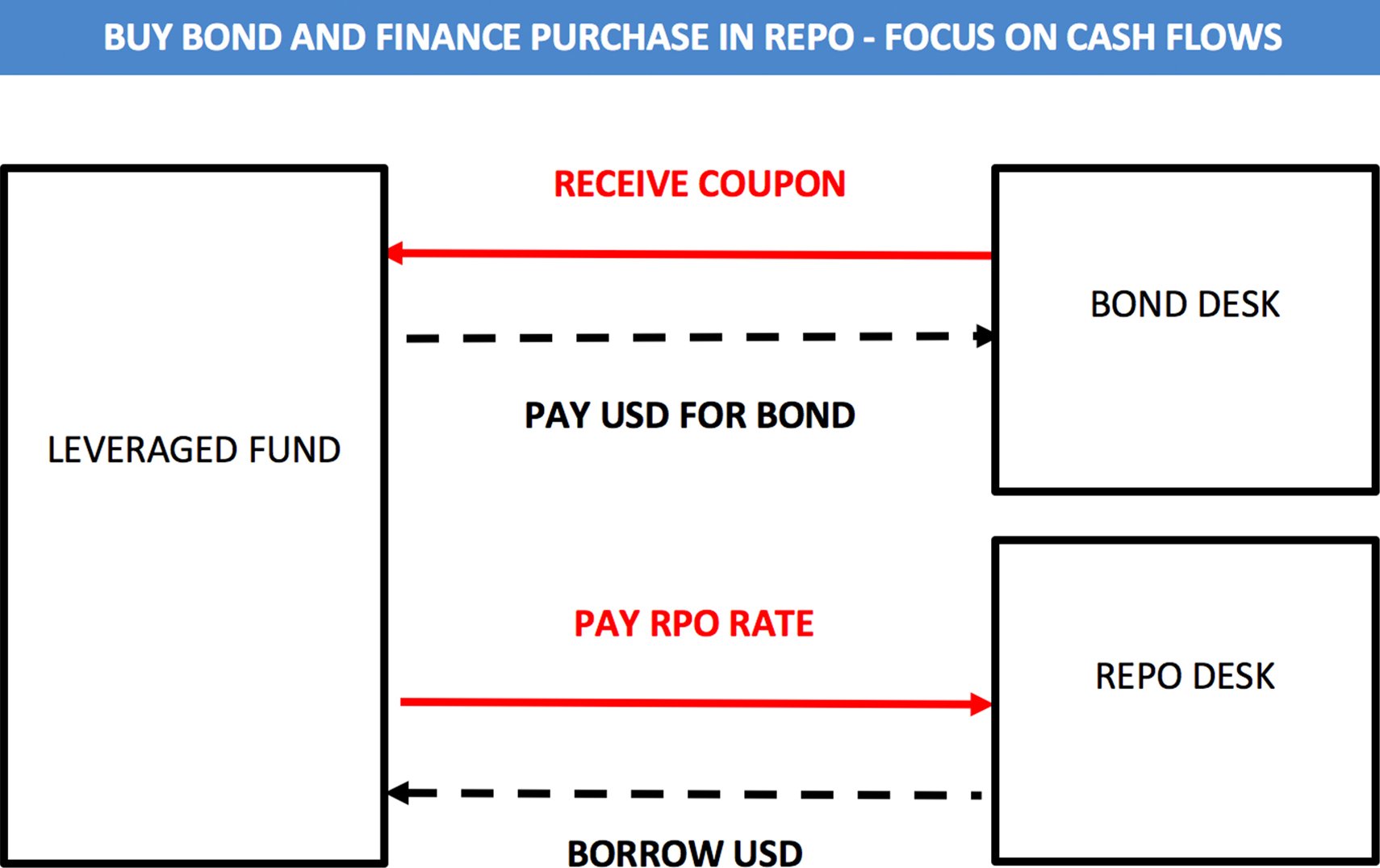 But looking at just the cash flows, perhaps we don’t need to use bonds or “real assets” unless they better fit our goal. When ee view this diagram

It doesn’t have anything different than this diagram

On the short side, where the trader is also taking on delivery risk, the bond gets tight in repo, the trade takes on a different angle: 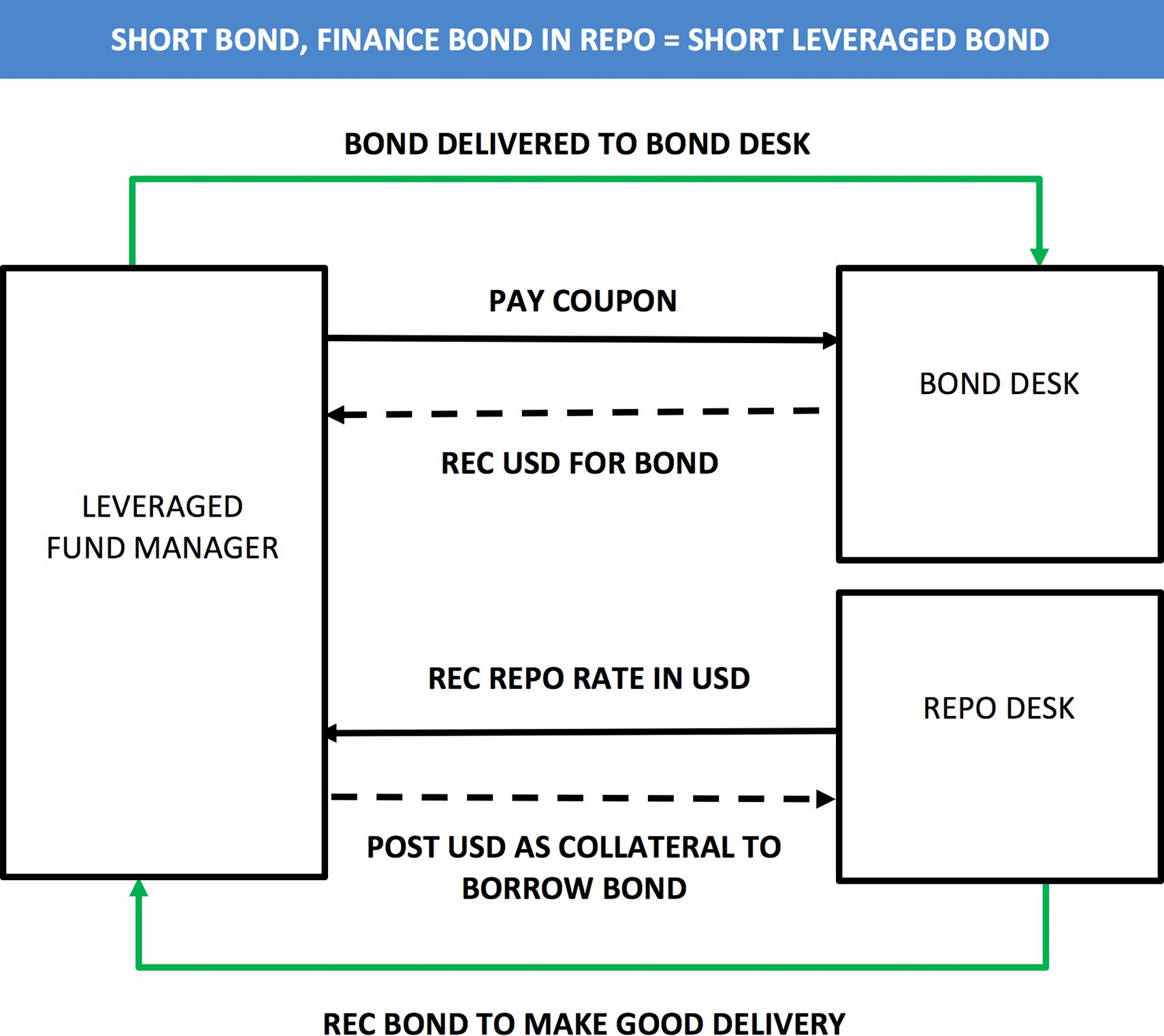 Again focusing on the cash flows: 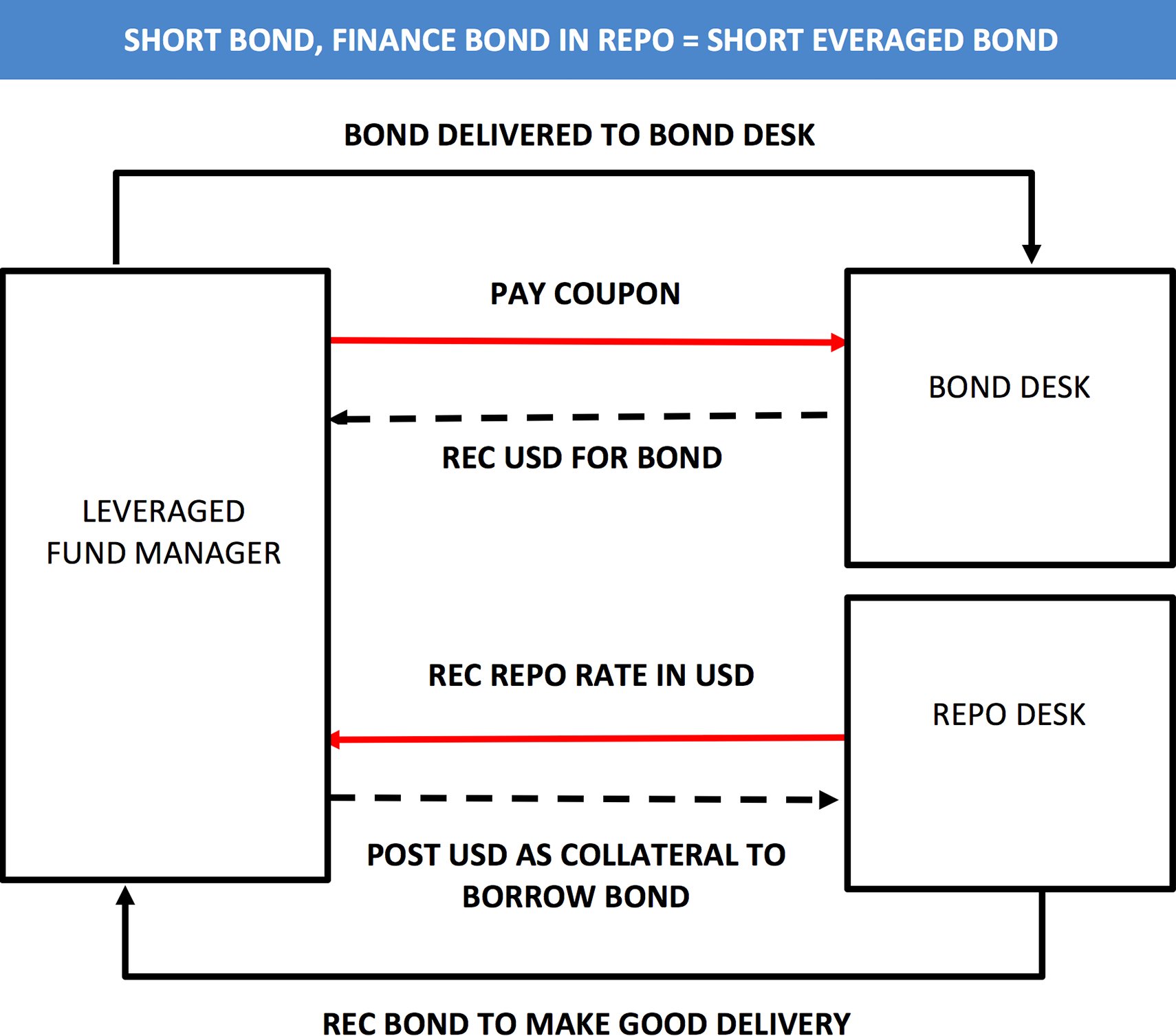 The above doesn’t look much different with respect to the cash flows below.

The differences between the bond position and the swap position are: